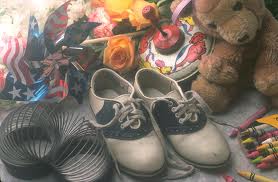 Childhood memories . . . most of mine are pretty good. I grew up as the eldest child of four in a small village in Wisconsin. My father was first generation Italian American, who worked in a hot, dirty muffler factory. My mother was a stay-at-home mom, who did everything from cutting our hair to canning everything my grandpa could grow in his garden. Her heritage was a combination of Danish, Dutch and English, so one memory I have was we called ourselves “Danos” because of our combined heritage.

I remember all of the things shown in this picture — especially the saddle shoes.

I remember my Dad throwing a baseball with my brother and me in the backyard. Unfortunately, if we muffed the catch, we ended up breaking the glass in the backdoor more than once. My mother would yell at all of us, until finally my Dad replaced the glass with plexi-glass.

We had a blow-up wading pool to cool off in the summer with the neighborhood kids. In the winter we were always outside playing in the snow — or shoveling it. Usually the shoveling came before the playing. We only came in when our knitted mittens were so wet and heavy with snow we couldn’t feel our fingers any longer.

One of the fondest memories was when my cousins, brother and I made up plays on Thanksgiving afternoon. We had an old 55-gallon barrel filled with old clothes we used as costumes. Dad had brought a couple of pallets home from the shop, so we used them for a set and a stage. We’d practice and practice until we were ready for the grown-ups to come down, sit on the basement steps and watch the production we had prepared. The best part was to hear their applause at the end.

My favorite storybook growing up? To tell you the truth, I don’t remember. It was probably Cinderella, Snow White or some other tale about a damsel in distress who was rescued by a handsome prince.

AND THEN THINGS CHANGED — WE ALL GREW UP!

My generation had a dilemma. We were raised by women who had worked during the war, but were expected to give up their employment when their men came home. We were raise to be stay-at-home moms, but there was an undercurrent of discontent in that role. It’s no wonder their daughters were found on college campuses, burning their bras, and demanding equal rights. These young women threw out the childhood propaganda  a prince would come and they’d live happily ever after. They demanded the opportunity to have choices. They demand equal pay for equal work. They took jobs that were formerly known as jobs for men. And they had the audacity to demand control over their own bodies. All of that was great. We were liberated! Yeah!

But were we? When the reality hit home, we realized that we had created a monster. Society said, “You want to work. Fine. But you better damn well take good care of your home and children, too.” Now we had two careers instead of one — a professional career that gave us a check and a homemaker career that sucked the life out of us. The mistake we made was, we didn’t liberate the men, too!

For myself, I took a position of having one foot in both camps. After my children were born, I CHOSE to quit my job and stay at home so I could enjoy being a mom. I told myself I had waited long enough to have my girls; so I wanted the opportunity to see them grow from babies to toddlers to little girls to teenagers to women. However, I’m really not sure if that was truly MY choice.

But to this day, I’m not sure if I stayed home because I wanted to do so, or whether the people around me had brainwashed me that a GOOD MOTHER always put her children first and stayed at home.

After they were in elementary school and didn’t need me as much as they did when they were small, I was lost. Now I didn’t have a foot in either the feminist camp (where I truly belonged) and the status quo camp where I lived. The process of “finding myself” was just as hard at 35 than it was at 20. It took going to college to reclaim my true identity. I loved exposure to new ideas and learning things I hadn’t been exposed to as a girl or woman. I loved having intelligent conversations about things other than children and household duties.

Unfortunately, the people around me — my husband, some friends and parents didn’t see it that way. , and it ended in a divorce a year after graduation. And why? Because I had grown strong enough to stand on my own two feet.

My voyage of discovery helped me unearth Barbara again. No one’s wife or mother or even daughter. Just me. Deep down under my societal roles, I was a REAL person. . . not too much different from that little girl who used to make up stories and plays in the basement with her cousins. My childhood curiosity had resurrected again  I got back to writing something more than entertaining letters. It was exhilarating  In fact as I write this I’m excited all over again with that part of my life.

The only thing that had changed was my maturity tempered my viewpoints because instead of seeing only black and white, now I saw shades of gray. I’m not apologizing to my feminist friends for taking the path I did — exploring both a stay-at-home role as well as a professional one. I’m just glad I didn’t have the pressure to perform in both camps at the same time.

And the result of this effort?  I learned to feel the fear and do it anyway. An mantra I use to this day.

Our laundry tubs are clogged. Yuck. I’ve done what I know what to do and that is get out the Liquid Plumber, pour, and wait–that’s the extent of my plumbing expertise. I’m sad to say, the chemicals didn’t do the trick to clear the clog. After  one treatment, the water that was in the tub went down, but when more water is drawn into the tub it just sits there.

I hate it when household annoyances like this come into my world. Like a lot of women my age, I never learned how to take care of such things–after all, I was raised as a GIRL. Now, I’m just a dumb white collar WOMAN with no household skills other than being able to pound a nail in the wall to hang a picture, or to use a screwdriver to tighten a loosen a screw on one thing or another. Oh, and I know how to paint and wallpaper a room.

Now, before you say, “But Barb, you can learn how to do simple household chores.” I will tell you that I DON’T WANT TO LEARN. As far as I’m concerned, plumbing is not supposed to be in  my DNA.

Growing up in world where there was a clear line of demarcation between  “men’s work” and “women’s work,” I figure there are just some things I can be left off the hook to fix. I don’t do car repairs and I don’t do plumbing. Before the last few years, Ken always did things like unclogging pipes and doing simple electrical fixes, but now he doesn’t have the strength or the cognition for these things any longer. So, it’s up to me to figure out how to get this problem solved.

That’s not to say I don’t work around the house. I’m a great cook. I vacuum and dust once in a while. I load and unload the dishwasher. I think this is enough.

Getting back to the problem at hand . . . My first instinct was to call a plumber and be done with it. But plumbers make more than CEOs at large corporations, so I needed to come up with another answer. So, I used one of my life lines and phoned a friend. So, through the goodness of his heart, tonight Ray is coming over after supper to take a look at the problem. Hopefully, he’ll be able to solve it ,and then I’ll be free to wash the laundry. After all, that’s a chore categorized as “women’s work,” right?